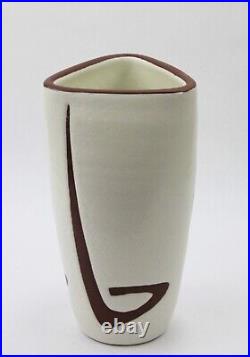 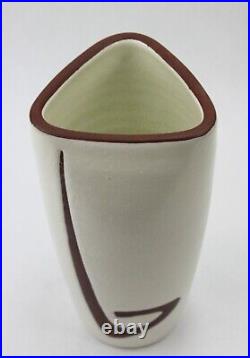 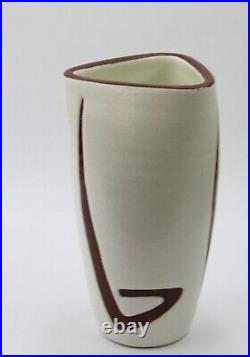 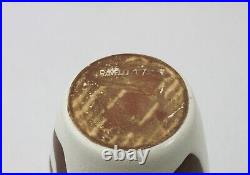 For your consideration, a Jaap Ravelli vase. Featuring triangular shape with abstract design in off-white and brown glazes. Measuring 8 1/2″ h x 3 1/2″ opening. In very nice vintage condition – no chips or cracks. Maker’s mark – Ravelli 17-4. Thanks for stopping in, please be sure to check out my other Ravelli pottery offerings. The ceramic work of Jaap Ravelli undoubtedly belongs to the most recognizable in the Dutch ceramics history of the twentieth century. His company in Valkenburg (ZH), which existed between 1947 and 1977, has been responsible for a large number of – mainly serial – produced articles, playing a major role in decorative design in post-war Netherlands. Jaap Ravelli was born in 1916 in Princenhage. In his youth he spent several years in the Dutch East Indies and a few years in Curaçao. Ceramics in the early 1940s. During the war years a building was rented in which a peat kiln was built. Between 1946 and 1947 the first products were made here, after which the company moved to Valkenburg and’Potterie Ravelli’ was a fact. Jaap became the artistic brain, while Dick occupied himself with business management in the background. Shortly after the war there was a great need for consumer goods. This led to the birth of many new companies that, with different degrees of success, produced products of varying quality. Potterie Ravelli also initially focused on tableware and simple vases. Because both owners had no experience in the ceramics field, many things had to be discovered and further developed. In retrospect, it could be said that the fact that the company developed in a non-conformist, non-traditional way may have been one of the most important success factors. Pretty soon the emphasis was on the better floristry products and gift items, often packed in wooden boxes. Especially the black and white figurines of animal and human figures were prove of the very innovative character of the artist Jaap Ravelli. The growing prosperity in the 1950s provided a favorable climate, in which the excellent design and originality were highly appreciated. Besides in the Netherlands, the products found a large audience abroad, such as in Germany, Australia, England and the United States. The success of the Potterie Ravelli in the 1950s did not go unnoticed. The original products were therefore soon copied by other companies, but without ever approaching the quality of the original. In the 1960s the emphasis was more on vases and bowls. In particular the Incara pottery (a combination of Inca and Ra) and Berkebast left a lasting memory. A little later came the Sang de Boeuf and turqoise glazes. Among the last successful products that came from the factory, were the’Keramobiles’, hanging trays intended for plants. These too were quickly followed, which led Ravelli to have the plant hangers made in plastic. The great boom of post-war ceramic production in the Netherlands gradually came to an end in the 1960s, mainly as a result of major competition from abroad. Potterie Ravelli also had a hard time and had to close the doors in 1977. What was left behind was a fascinating history of three decades in which she had played a very important role in the field of design and home decor. It is not for nothing that the Ravelli pottery has been a very popular collection area for years. Jaap Ravelli continued to make ceramics for a long time, mainly unique pieces. He died on April 1, 2011, at the age of 94. This item is in the category “Pottery & Glass\Decorative Pottery & Glassware\Vases”. The seller is “funkymom” and is located in this country: US. This item can be shipped to United States, Canada, United Kingdom, Denmark, Romania, Slovakia, Bulgaria, Czech Republic, Finland, Hungary, Latvia, Lithuania, Malta, Estonia, Australia, Greece, Portugal, Cyprus, Slovenia, Japan, China, Sweden, Korea, South, Indonesia, Taiwan, South Africa, Thailand, Belgium, France, Hong Kong, Ireland, Netherlands, Poland, Spain, Italy, Germany, Austria, Bahamas, Israel, Mexico, New Zealand, Philippines, Singapore, Switzerland, Norway, Saudi Arabia, United Arab Emirates, Qatar, Kuwait, Bahrain, Croatia, Republic of, Malaysia, Brazil, Chile, Colombia, Costa Rica, Panama, Trinidad and Tobago, Guatemala, Honduras, Jamaica, Antigua and Barbuda, Aruba, Belize, Dominica, Grenada, Saint Kitts-Nevis, Saint Lucia, Montserrat, Turks and Caicos Islands, Barbados, Bangladesh, Bermuda, Brunei Darussalam, Bolivia, Ecuador, Egypt, French Guiana, Guernsey, Gibraltar, Guadeloupe, Iceland, Jersey, Jordan, Cambodia, Cayman Islands, Liechtenstein, Sri Lanka, Luxembourg, Monaco, Macau, Martinique, Maldives, Nicaragua, Oman, Peru, Pakistan, Paraguay, Reunion, Vietnam, Uruguay.